Manufacturing jobs should enable more Indians to afford the types of products and services that consumers in the West take for granted. As a result, both industrial and non-industrial investment opportunities are likely to expand dramatically. 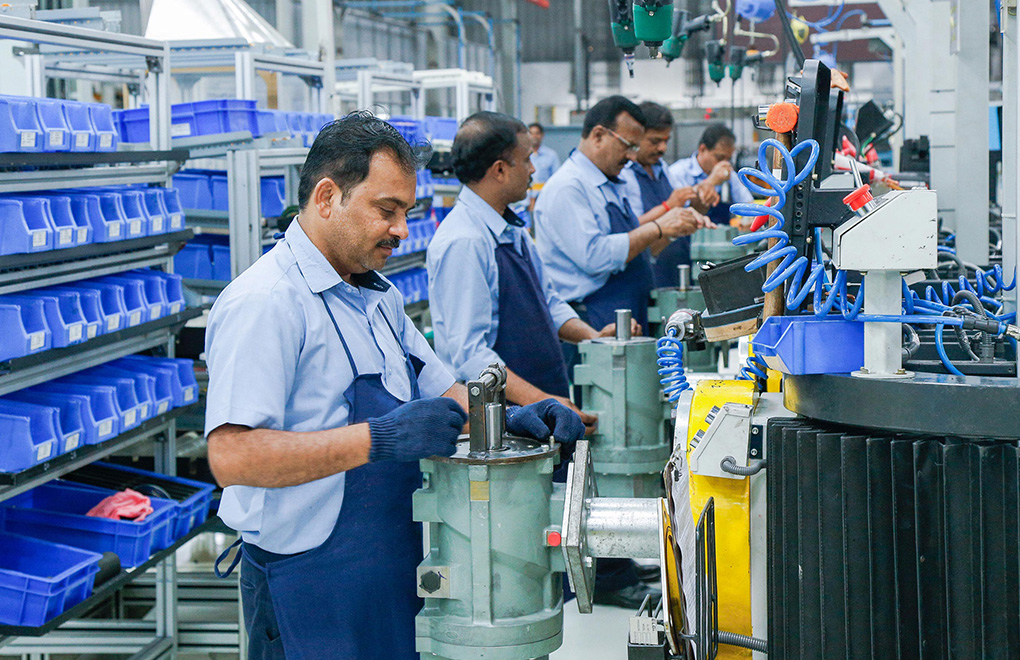 At Wasatch, we’ve made frequent visits to India over the past two decades. And each year, we meet on site with as many as 100 Indian company management teams. What we’ve seen is that the creativity and hard work of “old India” are being applied to the innovations of today’s “new India.”

In particular, we’ve been impressed with India’s efforts dedicated toward digitalization, financialization and formalization. These three megatrends have created a virtuous circle of progress that’s helped make India the fastest-growing major economy in the world and one of the most fertile emerging markets for investing.

More recently, a fourth megatrend—industrialization—has been gaining momentum. In this Market Scout, we’d like to highlight industrialization. But you can read about all of the megatrends in our white paper, India’s Virtuous Circle of Amazing Progress.

India, with a government that wasn’t highly organized from the top, didn’t participate meaningfully in that industrialization. In fact, when we at Wasatch started investing in India about 20 years ago, our focus was on domestic demand for basic goods and services. Industrialization wasn’t even on our radar back then.

Today, the situation is much different. We can peg the dawn of the new environment to 2014 when the government launched the Make in India initiative to boost infrastructure spending, enhance skill development, encourage innovation and protect intellectual property. The initiative provides incentives for companies to develop, manufacture and assemble products in India. More specifically, the Make in India initiative has three main objectives:

Lofty objectives notwithstanding, many programs in India take a while to percolate. This was the case for the Make in India initiative, which yielded no meaningful accomplishments for several years. Then all of a sudden, the transformation accelerated. A driving force has been the China Plus One trend in which countries and companies want to diversify their supply chains—at least to some extent (plus one)—outside of China, where manufacturers have become less reliable and more expensive partially due to rising labor costs.

Another driving force has been China’s zero-Covid policy in which major production and distribution centers have been locked down, exacerbating problems for global businesses that don’t have diversified sources of goods and that don’t have alternate transportation routes.

Related to the Make in India initiative, the Production Linked Incentive (PLI) scheme—which was launched by the government in 2020—is now gaining traction. Under the scheme, the government pays defined percentages to companies based on increased levels of manufacturing performed in India.

The PLI scheme applies to foreign companies and local companies alike, and we’re already seeing positive developments on the ground—particularly with regard to infrastructure and transportation in the manufacturing centers of the National Capital Region, Hyderabad and Chennai.

The PLI scheme is intended to increase exports and decrease imports of manufactured items. But what may be even more significant is that the scheme is likely to create jobs for India’s ballooning labor force.

EVERYTHING FROM MOBILE PHONES TO ACTIVE PHARMACEUTICAL INGREDIENTS

A major example of recent progress on the manufacturing front is that Apple Inc., citing aspirations to reduce reliance on Chinese suppliers, began producing the iPhone 13 in India. Over the past several years, the Modi government has used India’s status as a major importer of electronics to induce manufacturers to set up shop there. Production incentives, import duties and investment rules requiring local sourcing for 30% of parts were elements of a carrot-and-stick approach that ultimately led Apple in 2017 to begin producing the original iPhone SE in India.

In February 2022, the Ministry of Electronics and IT announced that India had received proposals worth over $20 billion from five companies to manufacture semiconductor chips and digital displays locally. The firms are seeking a total of more than $8 billion in incentives from the government, according to the official statement. While highly skilled upper-level workers are important in India’s economy, manufacturing is even more vital to provide a reasonable standard of living and upward mobility for the country’s large, young and growing population. Such improvements were what occurred for the Asian Tigers and mainland China.

Now that India is taking its turn at providing manufacturing jobs for the masses, the knock-on benefits should be substantial in areas like financial services and brand-name consumer products. As a result, we’re likely to see increased investment opportunities not just in the manufacturing businesses central to industrialization but in all types of companies.

In the near term, we expect to have approximately 10% to 20% of the Wasatch Emerging India strategy’s assets invested in companies tied to industrialization. But over time, we think the percentage will increase. Moreover, while industrialization in India isn’t currently as well-developed as digitalization, financialization and formalization, we believe industrialization may eventually become just as powerful as the other megatrends.

We’d like to conclude with a discussion of stock-price volatility. In this regard, we note that one of the hardest-hit segments globally has been growth-oriented technology. For example, as of June 30, 2022, the median tech stock in the Russell 2000® Growth Index was down about 60% from its peak.

Many companies in this segment have been particularly vulnerable because they have negative cash flows and are likely to need capital infusions over the next few years. For our part, we tend to invest in tech companies that have positive cash flows or that have the flexibility to dramatically improve their cash flows by temporarily spending less on advertising and promotion.

One way to understand the current market environment is to compare it to the environment from mid-2020 through mid-2021. Back then, stocks began the period at reasonable prices due to the Covid-related selloff. Moreover, fiscal and monetary policies were stimulative—and investors were largely confident that vaccines were on the way and that stimulus would continue. As a result, periodic dips were mild and were viewed as buying opportunities.

Recently, however, the “buy the dip” protocol has become particularly unreliable. From November 2021 through the present, we’ve experienced a bear market in the stocks of growth-oriented companies including those held by Wasatch.

The reasons have been well-publicized. Supply-chain problems and inflation took investors by surprise. The Federal Reserve (Fed), realizing it was “behind the curve,” accelerated the schedule for raising interest rates. The war in Ukraine exacerbated nervousness among investors. And China’s virus-containment lockdowns of large population centers further disrupted supply chains.

Although the market environment has been difficult, we think there are two main conditions that are positive. First, the broad selloff has created investment opportunities in which the stocks of high-quality, long-duration growth companies are less efficiently priced. Second, revenues at our companies have generally remained strong because demand is still high. A caveat is that earnings have been somewhat less impressive due to rising costs for labor and other inputs.

To understand the current environment more fully, we include these and other primary factors in the following two lists of opposing forces.

BUT HERE’S THE GOOD NEWS:

In considering these opposing forces, what tenets should we keep in mind? First, we must be prepared for ongoing volatility in the market. Second, volatility will likely give us additional opportunities to find mispriced stocks. Third, we must remain growth-oriented investors in high-quality companies—and we believe all investors should maintain their discipline because switching back and forth between disciplines can’t be executed effectively. Fourth, we must remember that there’s no evidence of macro predictions being used to consistently “time” moves in the market.

With sincere thanks for your continuing investment and for your trust,

At Wasatch, we refuse to launch a new investment strategy unless we’re 100% sure we already have the right team in place to manage it properly. And when we do launch a new strategy, we do so in an area where our portfolio managers have a desire to invest their own money based on the attractive opportunities available.

On one hand, smaller companies offer the potential for more growth and higher returns than larger caps. On the other hand, larger caps have historically produced lower returns but have been less volatile and have stacked up favorably by nearly any measure of quality. The challenge is to combine the best features of both universes.

We believe a good starting point for capturing an attractive blend of growth and quality sits just beyond the small–cap market. At Wasatch, we’ve seen it often: A smaller company may experience some of its best years of growth and transform into a higher–quality business right as it graduates into the mid–cap universe.

Those observations paved the way for the launch of the U.S. Select strategy—a concentrated, mid–cap focused portfolio that draws upon our nearly 50–year history in high–quality growth investing. You can read more about the strategy here.

Mutual-fund investing involves risks, and the loss of principal is possible. Investing in small-cap funds will be more volatile, and the loss of principal could be greater, than investing in large-cap or more diversified funds. Investing in foreign securities, especially in frontier and emerging markets, entails special risks, such as unstable currencies, highly volatile securities markets, and political and social instability, which are described in more detail in the prospectus.

Information in this document regarding market or economic trends, or the factors influencing historical or future performance, reflects the opinions of management as of the date of this document. These statements should not be relied upon for any other purpose. Past performance is no guarantee of future results, and there is no guarantee that the market forecasts discussed will be realized.

Wasatch Advisors, Inc., trading as Wasatch Global Investors ARBN 605 031 909, is regulated by the U.S. Securities and Exchange Commission under U.S. laws which differ from Australian laws. Wasatch Global Investors is exempt from the requirement to hold an Australian financial services licence in accordance with class order 03/1100 in respect of the provision of financial services to wholesale clients in Australia.

A bear market is generally defined as a drop of 20% or more in stock prices over at least a two-month period.

Earnings growth is a measure of growth in a company’s net income over a specific period, often one year.

Gross domestic product (GDP) is a basic measure of a country’s economic performance and is the market value of all final goods and services made within the borders of a country in a year.

Valuation is the process of determining the current worth of an asset or company.

The Index is calculated by or on behalf of FTSE International Limited or its affiliate, agent or partner. The LSE Group does not accept any liability whatsoever to any person arising out of (a) the use of, reliance on or any error in the Index or (b) investment in or operation of the Wasatch strategies or funds or the suitability of the Index for the purpose to which it is being put by Wasatch Global Investors.